The Halloween Blizzard of 1991

The forecast for tonight is a far cry from what we were facing 25 years ago today! On October 31-November 1, 1991, a major winter storm impacted the upper Midwest dropping snowfall amounts up to 15" in northern Iowa and more into Minnesota. Areas just east of the heavy snow were dealt a major ice storm with up to 3" of ice coating everything in some areas. The storm was so severe that 52 of Iowa's 99 counties were declared a disaster area by the Governor. Bitter cold would come in the days following the storm with some areas recording their earliest ever sub-zero temperatures of the season.

If snowstorms had names, this one would be called "Nasty."

The storm that struck northwest Iowa and southern Minnesota with almost a foot of snow on Halloween left many Spirit Lake residents shocked and totally unprepared.

"I've never seen a blizzard before Nov. first and I've been around 62 years," said Carol Kirschaum, a native of Elgin, IL.

"I don't remember a storm being this early," repeated Steve Stanford, of Bob's Watch Repair. "I can't relate this to anything I've ever experienced."

That is one reason most people will easily recall the Halloween blizzard in the next century. It is difficult to forget that Mother Nature dropped a foot of snow, 40 mile-per-hour gusts and minus 30-degree wind chills on the Midwest. The conditions made life miserable for everyone.

Except the children who missed a day of school.

And businesses that tried to keep their doors open. Lakes Insurance, Iowa Electric, Hoien Realty, Bob's Watch Repair, The Grill and the Dutch Lunch, were among the few who opened Friday and Saturday.

"We're different than a lot of businesses because we can work in our service department," Stanford explained. "Keeping the door open doesn't hurt us."

Matt Hall, owner of The Grill, declined to close his cafe—about 50 or 60 people crossed his doorway on Friday. Most of the people, he said, were cither road workers or local business owners.

"They all had good appetites," he said.

Maybe they thought it would be their last meal.

By mid-afternoon Friday, however, almost all of the owners had surrendered. The Dutch Lunch shut down at 3 p.m. with just two couples chatting in a booth. The Grill closed promptly at 1 p.m. with a promise from Hall:

"We'll still be open during the weekend as always."

A personal guarantee that no one will starve... if they have the money.

Those souls who walked around town had to feel like an out of shape runner on a treadmill. They were moving in place, it seemed. One such person, Marv Hamilton, hitchhiked a ride uptown to check on a leak at his son's business, Hamilton Radio-Television. Then, with the problem fixed, he started walking home. Eight long blocks away.

The best form of transportation was the snowmobile. Several slithered along the bumpy streets, splashing snow from behind their skis with each turn. The drivers did not have to worry about killing the engine or getting stuck. And, best of all, they had fun at the same time.

Realistically, the best form of transportation was none at all. The most intelligent should have walked only as far as the refrigerator and back. Stanford, a resident of Arnolds Park, did not even see his refrigerator on Thursday night He did not arrive home.

"I brought my sleeping bag in and slept here last night," he said with a grin. "It was very warm in there (his bag)."

If that idea wasn't strange enough, some people even considered getting married this weekend. Stanford said that two "kids" were coming in later Friday afternoon to pick up their rings. And October seemed like such a good date last year.

Historically, how does this storm rank with the biggest and baddest of all time? Although there have been more destructive storms, almost everyone interviewed agreed that last weekend was the worst October storm in 50 years.

The worst was probably the tragic Armistice Day Blizzard on Nov. 11, 1940.

"I was going to go with my parents—I always went with them," Kirschaum recalled about that day. "But I remembered my parents telling me we weren't going to the Armistice Banquet. That (the banquet) was a big thing in those days."

The weekend everyone will remember, many decades from now, with the words, "I remember that day back in ... 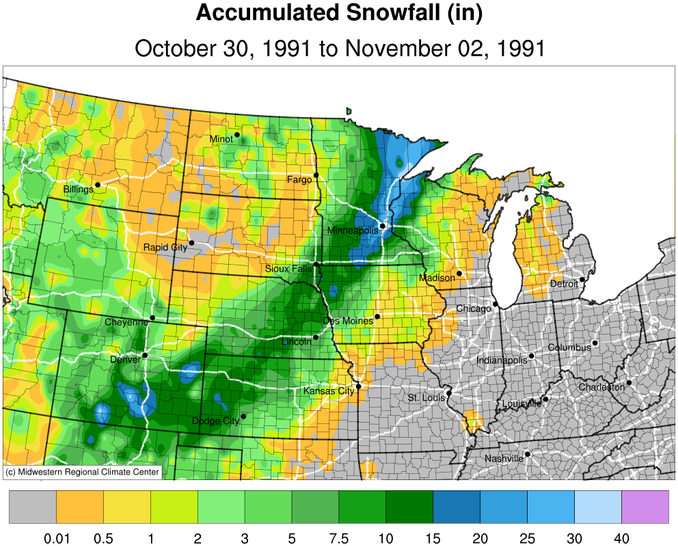 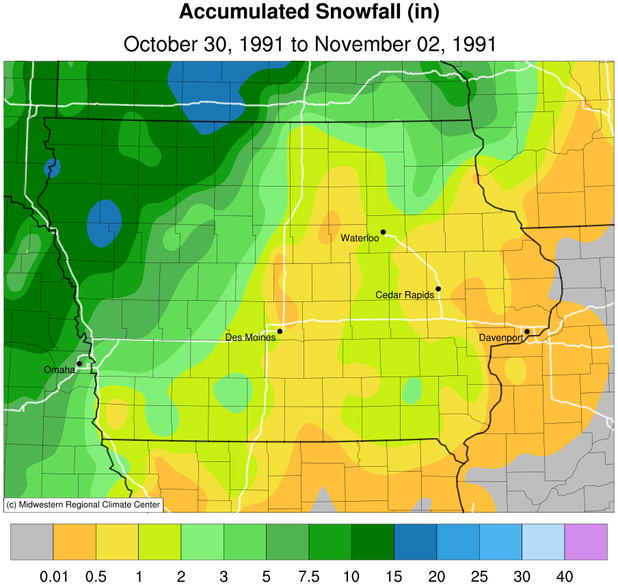 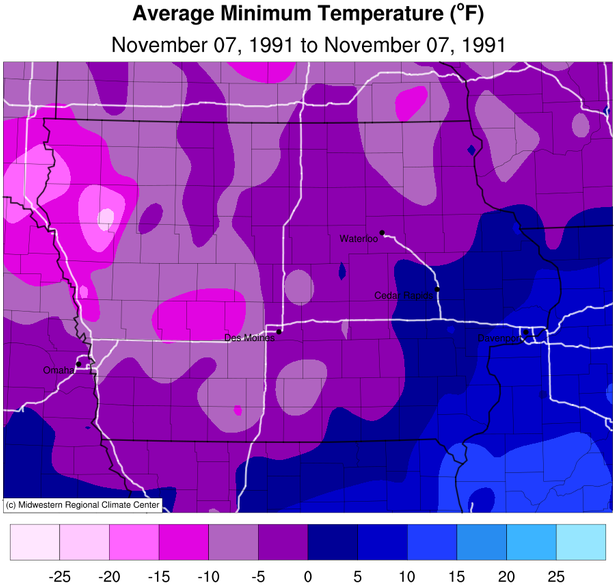 An overview of the storm in Iowa from NOAA

Arctic air rushed into Iowa following the passage of an Arctic cold front. Later on, an intense low pressure moved northeast along the frontal boundary. Snow began falling in northwest Iowa on the evening of the 30th, with the heaviest falling during the afternoon and night of the 31st. Eight to fifteen inches of snow fell in the northwest counties. Estherville received the most, with 15 inches. Trees were downed by the heavy snow and gusty winds. During the 31st, freezing rain fell over the southwest into the north-central counties of Iowa. One to two inches of ice accumulation occurred in many areas. Numerous trees were downed with electrical power being knocked out to 80,000 homes at one point. It took over a week to restore power m some of the rural areas. Several high voltage transmission lines collapsed due to the ice and wind. One segment stretched 24 miles from Boone to Lehigh, with 116 towers downed. A 65-mile stretch of the same line, with 270 towers, also collapsed from Lehigh to Sioux City. An 18-mile stretch of another line was downed from Gamer to Clear Lake. Another section of transmission line was downed by ice between Council Bluffs and Glenwood. Utility damage alone was estimated near $63 million. Hardest bit by the downed transmission lines was Iowa Public Service, with $21 million in damage. Another $6 million in damage was recorded by Iowa-Illinois Electric. Other damage to lines reported by individual utility companies included $11 million by Iowa Electric, $6 million by Interstate Power, $2 million each 6y Iowa Public Service and Iowa power, and between $15 and $20 million by RECs. The REC in Guthrie County, for example, expected damage to total about $1.5 million m their area. Several of the REC's m the ice storm affected area reported between 70 and 90 percent of their customers being without electricity at some point during the storm. Since the storm damage was so severe, power was not restored to many areas for extended periods. In addition to the obvious inconvenience, several communities were without water for a period of time. Many highways were closed, including Interstate 35, by downed lines. Near blizzard conditions occurred during the later stages of the storm, as snow was whipped by 30- to 40-mph winds. The Governor of Iowa declared 52 of the 99 counties in Iowa disaster areas because of" the severity of the ice storm. Crop damage was caused by the ice build-up and gusty winds. As much as 10 to 15 percent of the states com crop remained in the field at the time. The ice, snow, and wind flattened some fields. Although not a total loss, significant damage did occur to the crops. In dollar damage, this storm caused much more damage than the ice storm of 1990 even though the area of extent was not as large. The difference between the two was that there was very little wind during the 1990 storm, and temperatures warmed above freezing quickly the next day. This storm not only had strong winds associated with it, but temperatures remained below freezing for many days following the storm. The ice storm was considered the most costly ice storm in Iowa history. (From https://www.ncdc.noaa.gov/sites/default/files/attachments/October-1991-Storm-Data-Publication.pdf)